For days I’ve been wondering what to write in my blog this week. It feels to me the world knows that I did it so some suspenseful build up about how I got into the water in the dark at 1.30am; was fine until hours three to six when I was so sick that I went off course and the boat crew didn’t think I stood a chance of making it; how in the middle I turned things round despite having to swim through jellyfish for three hours which stung me all over; and how at the end I got swept down the coast of France and it took hours to land and my desperate mantra became ‘IT’S NOT GETTING ANY CLOSER’, doesn’t seem appropriate. I bet you forgot where that sentence started and were wondering whether it was ever going to end. A bit like me and my Channel swim.

But it did end, on a beautiful beach near Sangatte just west of Calais. The sand was white, the sun was setting and when I got on the boat afterwards I said it was just like the Maldives. Everyone laughed and said it wasn’t quite as beautiful as that but it was to me. It was my Maldives. And I’d thought that when I landed I would jump and scream and punch the air but, in fact, I just held my hands to my chest, shivering slightly, and murmured quietly: ‘I did it. I swam from England to France.’ Several people have said to me since that the swim sounds a bit like giving birth. 17 hours and 44 minutes of labour followed by euphoria that eclipses all the pain. If that’s what giving birth feels like then it’s true and, yet again, my Channel Challenge finds parallels with my Pursuit of Motherhood that I never knew were there.

I’ve been overwhelmed by the support and messages of congratulations I’ve received. I’m still in the process of replying to them all and have many many thanks to give. But I want to tell you about one message that I got from an old friend. She said the enormity of what I was doing only started to sink in when at about 10am on the day of the swim she clicked on the GPS tracker to see that I was right in the middle of the ocean. She said she wasn’t sure why but it seemed so poignant that she shed a tear and that in future when she is dwelling on the slightly shit things that ever happen in her life she’ll think of me and remember JESSICA SWAM THE CHANNEL to do something to address the slightly shit things in her life – and somehow that will help. When I read this, I shed a tear too.

Because although I still don’t have a baby and that will never not be hard, in a strange way it feels that becoming a Channel Swimmer has addressed the slightly shit things and given birth to me. 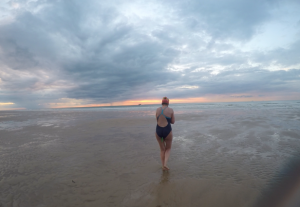